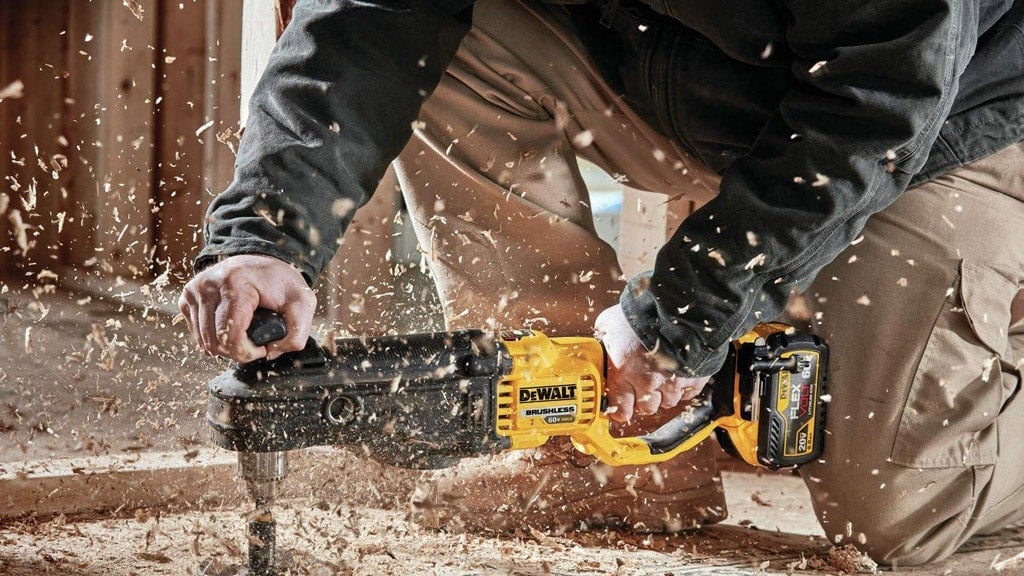 Cordless heavy duty right angle drills are an often overlooked but important addition to any toolbox. These handy tools are small drills that can fit into much tighter spaces than your average drill. Why? The head of these drills sits at a 90-degree angle, hence the name.

But how do you know what to look for in a high-quality cordless heavy duty right angle drills? To help you, we’re going to review three of them from some of the most well-known tool manufacturers out there.

DeWalt is a very well-known power tool brand. They’ve been around for decades, producing popular tools that professional timber framers and hobbyists have come to depend on.

This DeWalt right angle drill has a decent, heavy-duty 60V Max Brush-less Motor. It promises extreme power and torque while drilling and DeWalt definitely delivers on this promise. As a bonus, you get a longer run time than you would with other types of motors.

The clutch system is how you control force and torque while drilling. It’s an important thing to consider when you’re looking at any type of drill.

This DeWalt right angle drill has an anti-rotation E-Clutch System that uses technology that can monitor the motion of your drill. If it senses complications, it automatically shuts itself down. There’s even a red LED light that lets you know when the E-Clutch System is engaged.

The speed of DeWalt’s DCD470B 60V Max In-Line Stud and Joist Drill is based on a speed variable system that lets you choose what speed you need, depending on what job you’re working on. It has two-speed variable ranges which are 0 to 400 rpm and 0 to 1320 rpm.

Changing between speeds is really easy and you can do it without having to feather the drill trigger, which is always a plus. 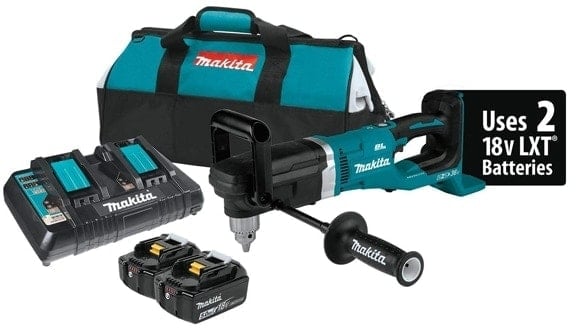 Makita started in Japan in 1915. They originally were only an electric motor sales and repair company but eventually evolved into production, expanding globally.

The motor to the Makita right angle drill isn’t as strong as some on the market but it’s still decent and gets the job done. It’s purpose-built, brushless and cordless, made to last 50% longer than other right angle drill models.

Much like the DeWalt right angle drill, this Makita drill has a special clutch system that both engages and disengages, detecting the motion of your drill as you’re using it. So, if your drill detects any complications or a safety issue, it will automatically shut off.

If it decides to power down, the green indicator light turns red so you know why the drill’s powered down and that it’s not due to a dying battery.

This drill uses technology that automatically adjusts the speed (and the torque) as needed for optimal performance.

Milwaukee has been an innovative company since it was created in 1924. In fact, they were the first power tool company to pioneer using lithium-ion batteries to avoid having to work around cords and outlets.

Next, we review their Milwaukee Electric 2708-22 M18 Fuel Hole Hawg Brush-less Right Angle Drill to see if they’re keeping up with their reputation.

The motor for this cordless right angle drill uses POWERSTATE technology, making it stand out from other brands. The POWERSTATE and Brush-less motor provides constant power while you’re drilling, even when you’re working with a heavy load of lumber.

Unfortunately, the one con to this Milwaukee right angle drill is that it’s lacking in the technology that other brands are using, like DeWalt’s E-Clutch. Despite this, it’s a relatively safe drill to use.

On the bright side, the clutch is ergonomic so it’s comfortable and easy on your hands. No more hand cramps after long projects.

The Milwaukee Electric 2708-22 M18 Fuel Hole Hawg Brush-less Right Angle Drill has a one-speed variable that lets you control the speed and torque of the drill. There’s a speed for almost any job. The speed range for this model is 0 to 1200 rpm.

Which of the Cordless  heavy duty right angle drills is Best?

All three brands and models have their own pros and cons so deciding which one is best is not very straightforward.

DeWalt is always a trustworthy brand that’s known for making quality tools. This hasn’t changed with their right angle drill. If you want the basics and aren’t looking for something with a lot of shiny new features, this drill is perfect for you. Keep in mind, this drill is a little bit bigger than the other models we reviewed.

Lastly, the Milwaukee drill model is a favorite. It doesn’t have the strength of the Makita but goes above and beyond when it comes to extra features. This model is a great choice if you’re a hobbyist or if you work on smaller projects.

Please note:
Timber Frame HQ is a participant in the Amazon Services LLC Associates Program, an affiliate advertising program designed to provide a means for us to earn advertising fees by advertising and linking to amazon.com. When you purchase something from Amazon, a small percentage of the sale goes to support the efforts of TFHQ.