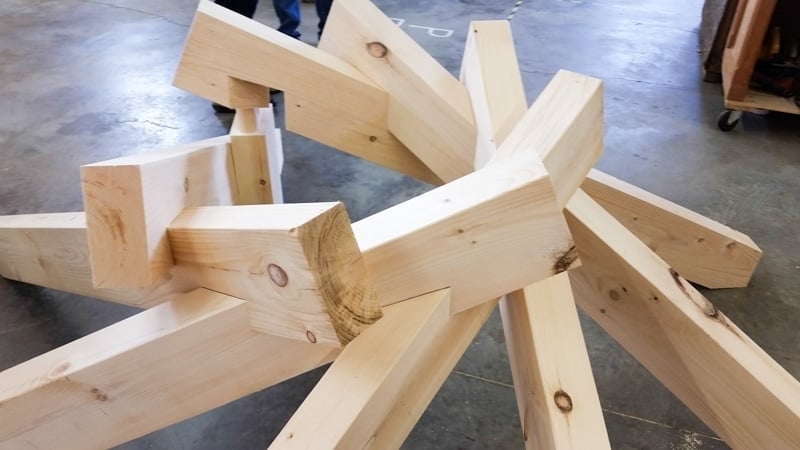 Last weekend, my friend Stephen Morrison and I took off at 5 am to head to Sauter Timber in Rockwood, TN for the 2014 SE Timber Framers Guild Meetup.  We made our way there through snow and wind, all the while looking forward to hanging out, seeing friends, and exploring the technology that Reinhard and his team employs to cut timbers and to hear about Cross Laminated Timbers (CLT).   The presentation of this technology was the great draw of making the trip.

After arriving, meeting everyone, and getting a cup of tea, we all sat down for the first presentations of the day. Reinhard’s crew gave us a demonstration of the new Hundegger Robot 6 axis CNC machine, which turned out an example of a reciprocal roof in a matter of about 30 minutes. One of the problems folks have with the CNC machines is the accuracy of the cutting.  The next presentation was of great interest and it pitted the machine vs hand layout. We first sat down and had a brief lesson in a new software solution called SEMA which automates a lot of things that I do manually in Autocad while designing a frame.  They pulled out a jack rafter in the frame they were working on, printed the drawings for everyone to see, laid out the timber by hand and then the fun began.  They threw that piece in the Hundegger Robot machine and started cutting it from the code the software produced for that piece.  It was cool to watch it cut the lines that a human laid out…almost.  The birds mount cut that was hand drawn turned out in the end to be off by a 1/16th of an inch after a careful examination by all. After that we all sat down for lunch and conversation.  This was a free event for everyone so the meals and t-shirt were all due to the sponsors of the event.  A big thanks to all: Sauter Timber, TimberLinx, Northwest Specialty Timber, Log and Timber Connections, Hundegger USA, and Fire Tower Engineered Timber.

Once we all were full, we had another brief presentation from the machine.  We got into another great discussion led by Charles Judd on CLTs.  In short, a CLT is a bunch of 2x material lain together to be 4.5”-12” thick x 48” wide, up to lengths of 48’ long.  This forms giant panels that can be cut into giant truss components, or into walls and roof panels.  It was also great to be in Sauter’s shop that was made of these panels.  Charles Judd led a crew recently that erected a school out of these CLT panels in West Virginia and his presentation was about the ins and outs of installing the CLTs.  My big take away was that these panels are really cool, they are an upcoming building technology, and I want to be a part of using them. 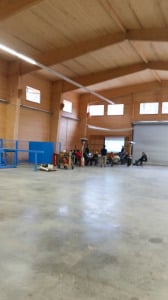 A component in timber framing that holds a lot of roofs to timber frames are screws. I was glad to see Will Levertt there with Log and Timber Connections to talk about the ASSY screws and some of the new fasteners that are coming out.  These screws are strong and drive better than most because of how they are made.  He also talked about the strength and benefits of the fully threaded screws and the different applications.  I had been speccing them out for some connections such as keyed beams, and it was good to hear some other things we can use them for in our industry.

After Will’s discussion we all sat down, had a beer and had an open round table discussion on the future of timber framing, CLTs, marketing and anything else that came up.  At that point, and with a 4 hour drive back, it was time to take off and head home.   The 8 hours in a truck was certainly worth the time and it was a good time to learn and see the new technologies that are heading our way.    A special thanks to Reinhard and his team for organizing the day and giving us all something to think about for months to come. 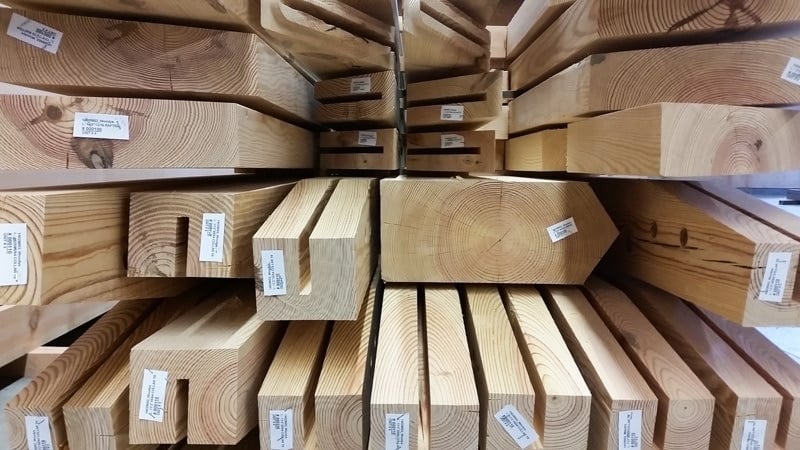