As co-owner and founder of Carolina Timberworks, Eric Morley leads his company in delivering a level of customer satisfaction, attention to detail, and quality that is simply uncommon in the general construction industry. Based in the mountain town of Boone, NC, they engineer, fabricate and professionally install timber frames and post and beam structures across the USA, Canada and the Bahamas. Both owners work full-time at the company, and are responsive to their customers’ needs.

Eric’s father worked for the Caterpillar Tractor Company in Peoria, Illinois until the family moved overseas in the late 50’s. He grew up in Africa, Switzerland and France, and after graduating from the University of North Carolina at Chapel Hill, he joined a division of International Paper involved in the import/export of wood products. A few years later, he returned to school to pursue an MBA degree at Appalachian State University in Boone, NC, and wanted to stay in the area. As Eric says, “It’s a great place to live, but a hard place to make a living, so I made my own job. Actually, it sort of just happened–one day the owner of Harmony Timberworks asked if I’d like to go into business with him. We ended up building a manufacturing operation from scratch and I ran it for a number of years. In 2003, I was fired (for doing the right thing). This was one of those events in life that seemed awful at the time, but turned out to be wonderful (Carolina Timberworks was born). I also learned an important business lesson–if you don’t own at least 51% of a company, you don’t have any control, and you can be fired from your own company. After a week of feeling sorry for myself, I wrote the business plan for Carolina Timberworks. We secured a bank loan, rented an office for $500 a month, and set up our new Laguna bandsaw in my garage. In short, just another overnight success story…in 13 years.” 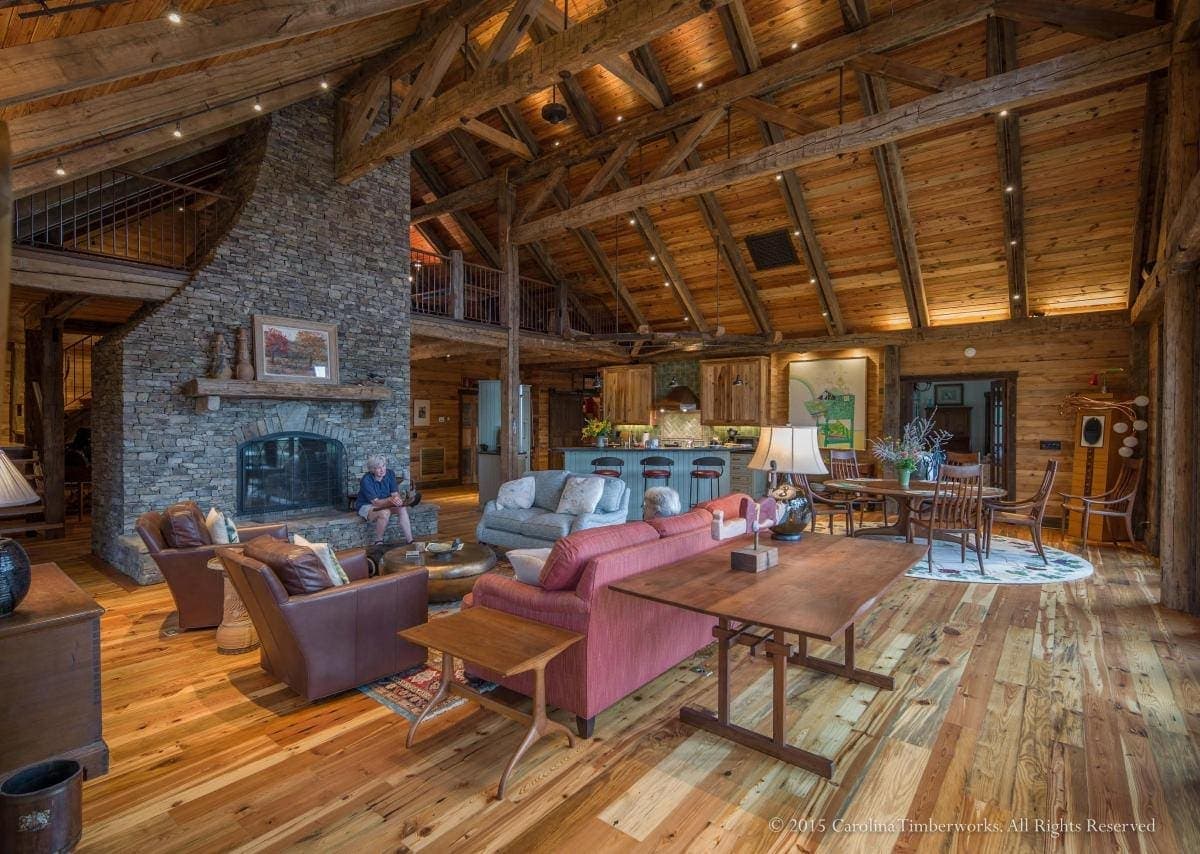 According to Eric, because Carolina Timberworks cuts by hand (instead of by CNC machine), and pre-fits (by hand), by the time a timber frame leaves their shop, every beam will have been touched, turned, and inspected by a craftsman’s hand countless times. One of the two owners will have supervised the crew from start-to-finish and will have cut some of the joinery. Then, the same timber framers who’ve spent weeks in the shop wrapping their heads around the complexities specific to each timber frame, raise the timber frames on site. The framers are not subcontractors, but employees: they’re professionals and will work safely, show up on time, with all the tools they need, work long hours–even under miserable weather conditions.
There are three General Contractors at Carolina Timberworks: two shop framers and one owner. Almost everyone in the company began their career in construction. This gives them the home building and woodworking skills to integrate timber framing smoothly into the rest of the home’s construction. All of the crew enthusiastically collaborates with other members of the team¬including other subs on the job.

There is a strong culture of safety at Carolina Timberworks – their employees have undergone extensive training, and are in compliance with OSHA standards as well as the industry’s best practices.
One of the things that sets Carolina Timberworks apart is doing things by hand in a machine age. As Eric says, “The benefits are subtle, but there is a spirit in objects that are hand made. True authenticity is a lack of perfection, and when tools are guided by hand, uncertainty, the care with which the timber framer exercises his craft, and heart become an integral part of the finished product.” They also love putting reclaimed wood beams back to work, and have worked with reclaimed beams extensively – which involves grading and sizing every timber, and having the joinery designed by a specialty structural engineer familiar with both timber framing and reclaimed wood. Carolina Timberworks puts a high value on integrity. “We will tell you the truth and endeavor to do the right thing—even when it hurts” says Eric; “We do what we said we’d do, when we said we do it, and we endeavor to exceed our clients’ expectations. When we make a mistake, we promptly admit it, apologize, and fix it–priority one.”

The company operates on fixed price installations. Their contracts include a detailed 10-15 page written proposal including 3D renderings of the timber framing. And to help clients visualize their home, they provide 3D renderings of every timber frame they quote.

One of Eric’s most challenging projects was early in his timber framing career. As he says: “We built and installed the timber framing for an addition to The Loeb Boathouse in Central Park, NYC. A wedding in the timber frame addition had been planned (and paid for) in advance–making an already challenging construction schedule even more so. Getting the necessary permits to bring two (police-escorted) tractor trailers and a crane into Central Park, raising a timber frame at night…then finding out that the holes in the metal plates didn’t line up exactly…finding a welder willing to start immediately …”

Eric tells us one of his proudest moments was when two of the banks they approached, upon reading their business plan, told them it was the best plan they’d ever seen. Also especially gratifying was “Seeing our work featured in Fine Homebuilding magazine as well as Garden & Gun”. In order to make timber framing projects as pain-free as possible, at Carolina Timberworks, they try to be upfront about the fact that timber framing is an expensive way to build. Also, their detailed and fixed price proposals help avoid unpleasant surprises like unexpected costs and change orders. And as Eric says, “Finally, when what has been designed exceeds the budget, we’re good at proposing solutions that remove cost without materially affecting the look. “