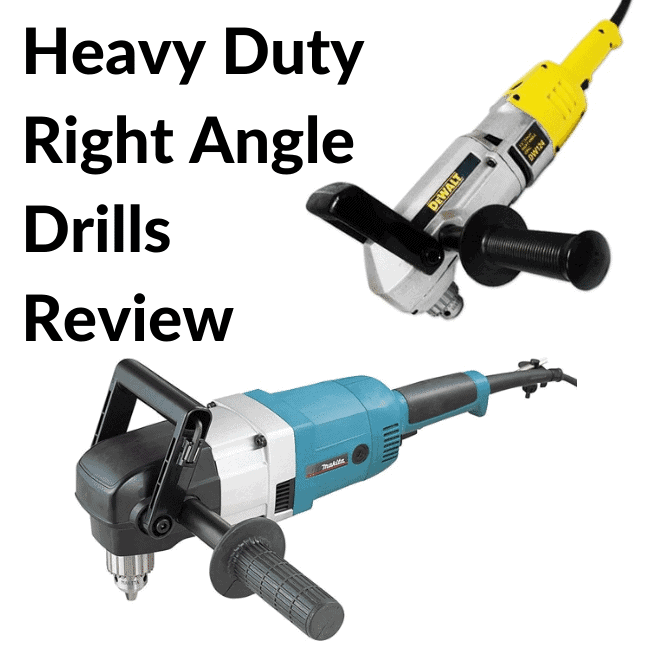 A heavy-duty right angle drill is an important tool for professionals in many trades. The ability to drill holes in tight spaces quickly and safely is important for both professional and amateur timber framers in particular.  The drills need to be both durable and versatile, while also generating enough torque to get the job done. Timber framing often requires the mixing of compounds, such as concrete, and the boring of large holes through timber; making the heavy-duty drill an essential tool for timber framers.

For quite some time now there has been a bit of a rivalry between Makita and DeWalt. Not only are the two companies direct competitors, but there is also often debate amongst professionals as to which brand offers the more reliable and better-performing tools.

Below we will be taking a look a right-angle drill from each brand in this heavy duty right angle drills review, the first offered by Makita and the second by DeWalt. First up we have the Makita drill, which can be found HERE.

The Makita corded drill comes with a “Sidewinder” handle that rotates 90 degrees to the left or right for versatile drill positioning. This is a really useful feature for timber framers as it allows the user to adjust the tool according to the task at hand. The drill’s 10-amp motor makes the Makita a powerful performer, while the torque limiter disengages the motor if the bit ever binds. This is a useful feature that prevents the drill from enduring unnecessary wear.

The Makita also uses an adjustable heavy-duty top handle. The top handle has built-in storage for a hex wrench, which means less fumbling around on the job. The drill’s side handle, which also has hex wrench storage, has an ergonomic design with a comfortable rubber grip that is meant to provide better control for the operator.

Weighing just 13.89lbs reduces operator fatigue when compared to heavier drills; however, the Makita’s relatively lightweight package should not fool you into thinking the drill lacks power and torque. The drill’s two-speed selector switch allows the operator to choose between high-speed drilling (1200 RPM), or low speed (300 RPM). The Makita’s compact size makes it easier to use in tight spaces and increases portability. This makes the Makita a flexible tool that can be adapted for various jobs.

The drill is manufactured in Japan and comes in Makita’s familiar teal and black color scheme. Packaged with the Makita drill is a plastic case, check key, key holder, hex wrench, and the detachable side handle grip. Overall the Makita DA4031 corded right angle drill is a powerful and versatile tool that can be used to complete various repair and construction tasks. Next, we will take a look at the DeWalt drill, which can be found through the following LINK.

The 100 percent ball-bearing construction of the DeWalt DW124K corded drill is intended to give the tool a longer life and greater level of durability. DeWalt’s 11.5-amp drill also generates a maximum speed of 1200 RPM and has a lower 300 RPM setting designed for boring larger holes. The drill makes use a mechanical clutch in the lower speed setting that will engage at 70 ft. lbs. of torque, preventing kickback. This gives the operator a more comfortable and controlled experience.

Where the DeWalt really differs from the Makita is in its size and weight. The DeWalt drill is both longer and heavier than the Makita. The DEWALT features an extra-long 21-inch design, which was designed to give the operator more leverage and control. It also weighs in at 18lbs, which is significantly heavier than the Makita’s total weight of 13.89lbs. While it may seem that the DeWalt’s excess weight and size is a disadvantage when it comes to corded drills, user preference plays a role here. Some operators prefer the more durable feel of a heavier drill while others feel that every pound of reduced weight allows for easier portability and reduced user fatigue. The choice is up to what the operator feels more comfortable with; especially given both drills generate the same power.

Like the Makita, the DeWalt also makes use of an adjustable top handle and a two-position side handle. Both corded drills provide operators with a solid amount of leverage and control. The DeWalt also comes packaged with a chuck key holder, the adjustable side handle, a bail handle, and a heavy-duty drill kit box.

DeWalt tools are known for their durability and this drill is no exception. Both drills come with a manufacturer’s warranty so you can feel confident if any problems arise, you will be able to have them addressed.

Which Heavy Duty Drill is Best? It is difficult to choose which of the two heavy-duty drills is the superior tool. Both drills get high marks for power and versatility. The fact both drills have adjustable top and side handles means they will both offer the operator a great level of control. The variable speed tiggers offered by both drills also make them a flexible tool for timber framers and other professionals. With both tools coming in at a similar price, there is not much to choose from there. Both drills are also corded, meaning there is no opportunity to compare battery life, which can often be the deciding factor when comparing power tools. Both could be used for professional jobs, or for the occasional DIY project.

Determining your typical use case will be the most helpful. Are you planning on drilling timbers laid out on sawhorses? You may prefer the heavier Dewalt with a longer body that will offer you more control for drilling perfectly straight. Or are you drilling above your head for drilling peg holes in situ? You'll want the lighter and shorter Makita.

Personal preference might be the only deciding factor between two well-built and powerful drills. When considering one of these two drills, it might be worth taking into consideration the weight and size of each drill and deciding which you would prefer to work with. As for the brands themselves, both Makita and DeWalt have well-deserved reputations for offering reliable and functional products. As many professional timber framers will tell you, you cannot really go wrong with either company.  Either of the above heavy duty drills can handle what would be required of them by any timber framing project.